WWF-NL’s Project Advisor Stacey Mac Donald participated in the 6th cetacean (whales & dolphins) scientific expedition of 2022, organized by the Caribbean Cetacean Society (CCS). She joined the expedition for one week, together with colleagues within the Dutch Caribbean and from WWF-NL. In this blog Stacey shares her amazing experience. 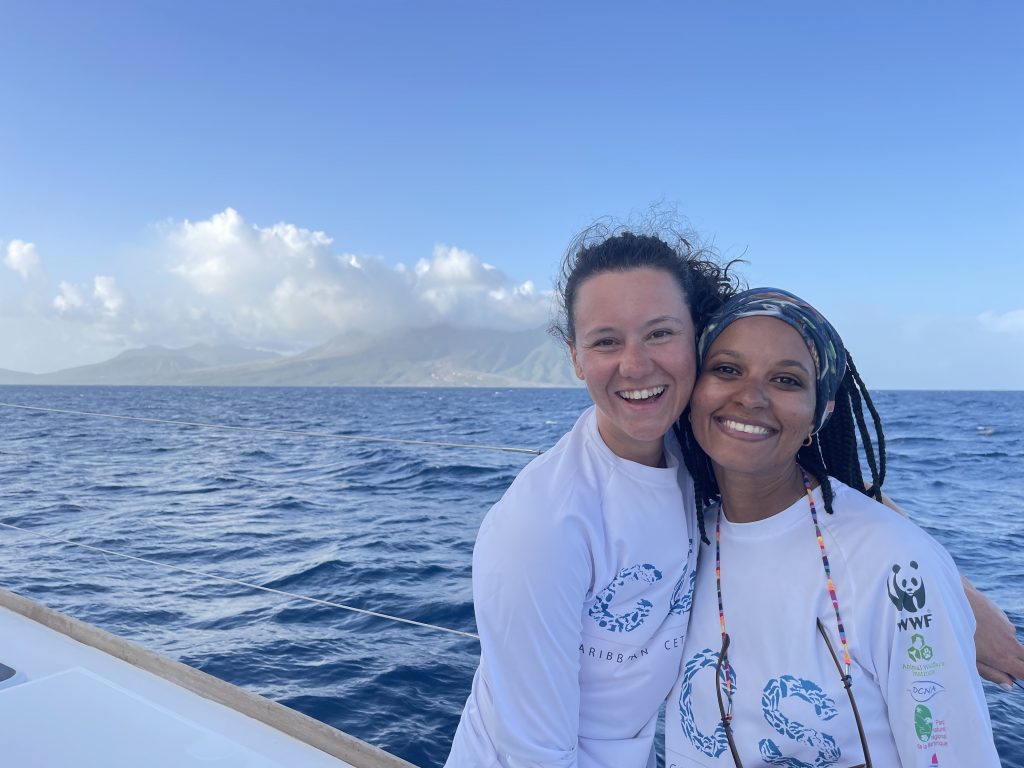 On Monday morning, September 15th, we departed the harbor for the expedition. First, we got a briefing from the expedition leader and founder of CCS, Jeffrey Bernus, to learn about the cetacean survey protocol. My colleague Nathalie Houtman, Advisor Marine Species and Fisheries at WWF-NL, and I had the first observation shift. We were systematically and somewhat intuitively scanning the ocean around us.

Would I recognize a dorsal fin among the waves? Would I be able to distinguish a whale blow from the constant salt sprays made by the wind? And then, after sailing for about 40 minutes, I saw something! Far in the distance, a brown-greyish mass, and a fin. I pointed in the direction of the sighting, directing the captain, as the rest of the crew started to run frantically around, grabbing cameras and tablets, and all the while we were trying not to lose this majestic animal, as we headed her way.

But, alas, we lost her (or him). (S)he went down for a dive, and we did not get a chance to do a proper photo identification. Yet, Jeffrey’s and Nathalie’s expert eyes confirmed that what we saw was a beaked whale, one of the deepest and longest divers, and a rare species to observe. What a start of the morning! I knew right then and there that this was going to be an experience of a lifetime.

As a social psychologist working for WWF-NL, I have not had many wildlife encounters, unlike many of my colleagues, despite working for and living in and with nature every day. But after these first moments that morning during the Ti Whale An Nou Caribbean cetacean expedition, I understood what all the ‘wildlife’ fuss is about.

Ti Whale An Nou – Our Own Little Whales

Cetaceans are important for the health of our oceans and the Caribbean is an important home for these animals; thanks to research we know that they eat, rest, and even breed in our region. Did you know that there are at least 33 different kinds of whales and dolphins that have been observed through the Caribbean, even Killer whales? Until very recently, I surely did not. And like me there are still many people who don’t know this. And unfortunately, because very few people are aware of their presence in the Caribbean, these cetaceans face many threats. These include entanglement in fishing gear, shipping strikes, underwater noise pollution, harassment, whaling and pollution. 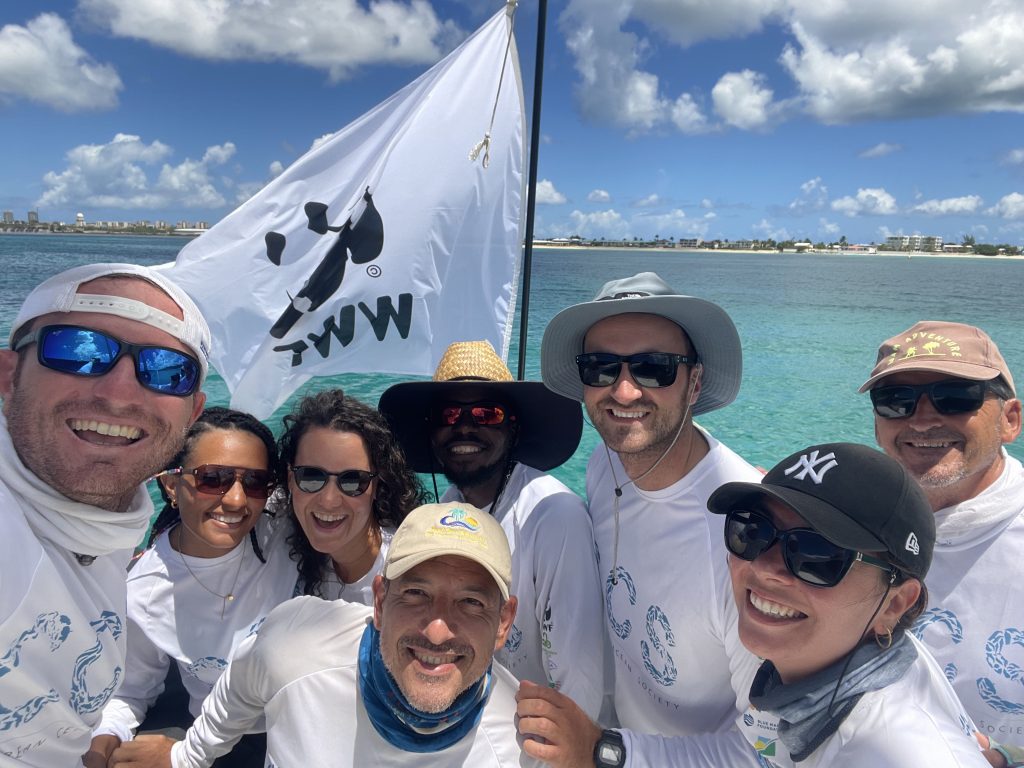 Jeffrey Bernus of CCS (left) together with the expedition team

Since 2019 WWF-NL partnered up with CCS to work on the protection of whales and dolphins in the Caribbean region. For six months during the year, CCS organizes six scientific expeditions to locate, monitor and research the cetaceans living in our Caribbean Sea. This expedition is called Ti Whale An Nou, which in a mix of English Creole means “our own little whales”. These expeditions facilitate knowledge sharing, collaboration, scientific knowledge expansion, and the building of skills within the Caribbean.

The Expedition: Learning by Doing

We sailed all the way from Martinique to Guadeloupe, from Montserrat to St. Eustatius, on to Anguilla, adventuring a bit on the Atlantic Ocean to Saint Barthelemy and lastly St. Maarten. We learned how to do observations, how to collect and register a broad range of data, listen to the hydrophone and work on our photography skills for the photo identification of the cetaceans. Working in shifts of two hours, we had many opportunities to work on our skills. In the first week we had 8 unique species sightings: a beaked whale, pygmy orcas, spinner dolphins, sperm whales, Fraser dolphins, pan-tropical spotted dolphins, bottlenose dolphins and the Atlantic spotted dolphins. 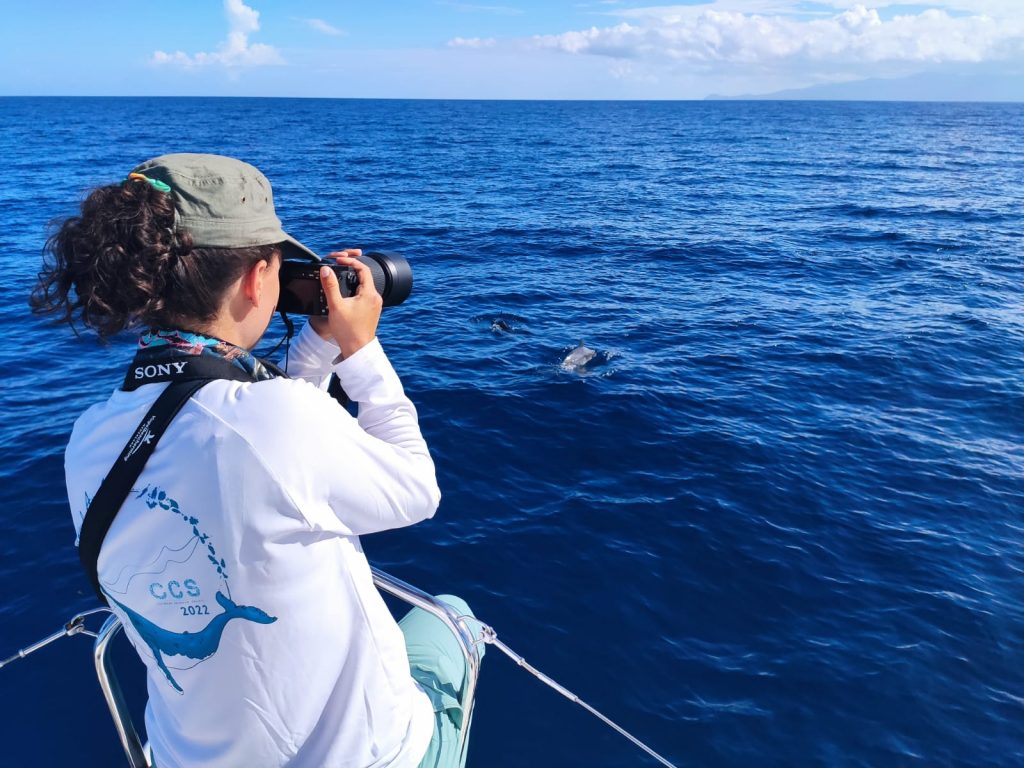 I found dolphins to be the most difficult to photograph. They were swimming, jumping, and spinning all around us, but with their speed it takes some real skill to capture their dorsal fins properly. To be able to identify the families of dolphins swimming in our waters, it is important to have a sharp, close shot of their dorsal fin. Each dorsal fin is unique, just like our human fingerprints. The more fins we collect, the better we can estimate the abundance and movements for each dolphin species. 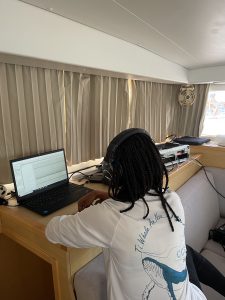 Listening to the hydrophone

While sperm whales, and whales in general, can be a bit more challenging to spot sometimes, they are somewhat easier to capture if you can get close enough with the help of a good captain and following the correct methods. One day we spotted three sperm whales resting on the surface of the ocean. The captain calmly navigated the boat on a perfect angle and then we waited for the dive. These sperm whales made our work easy, diving into the depths one at the time to go catch some dinner (squids). We photographed their flukes, which like the dolphin’s dorsal fin are unique for each whale. In addition to photographing the flukes of the sperm whales, we also recorded their ‘clicks’ with the hydrophone. Each clan (group of several families with the same culture) of sperm whale has a unique pattern of clicks called “Coda” (their signature). Having this information tells us about the clan distribution, and the abundance for each of these cultural populations.

Working with and learning from CCS about the importance and urgency to protect our most precious marine mammals has been a real eyeopener. We did not only see many species, but we also encountered various threats that endanger the livelihoods of these animals. We saw many fishing boats and several large freight ships. We also saw many Fish Aggregation Devices (anchored constructions of ropes and buoys to attract pelagic fish species) which can lead to entanglement.

While we can’t be sure whether it was coincidence, it was remarkable that we barely saw or heard cetaceans near St. Eustatius and Sint Maarten. These are two places where shipping traffic seems to be high. Could it be that whales and dolphins avoid these areas because of noise pollution? This is something we are still trying to figure out. It is also really surprising that we know very little about this incredible hotspot in the Caribbean. We truly need to learn more about the number of species that live here, where they live and of course the threats they face, to make sure we do not lose them. 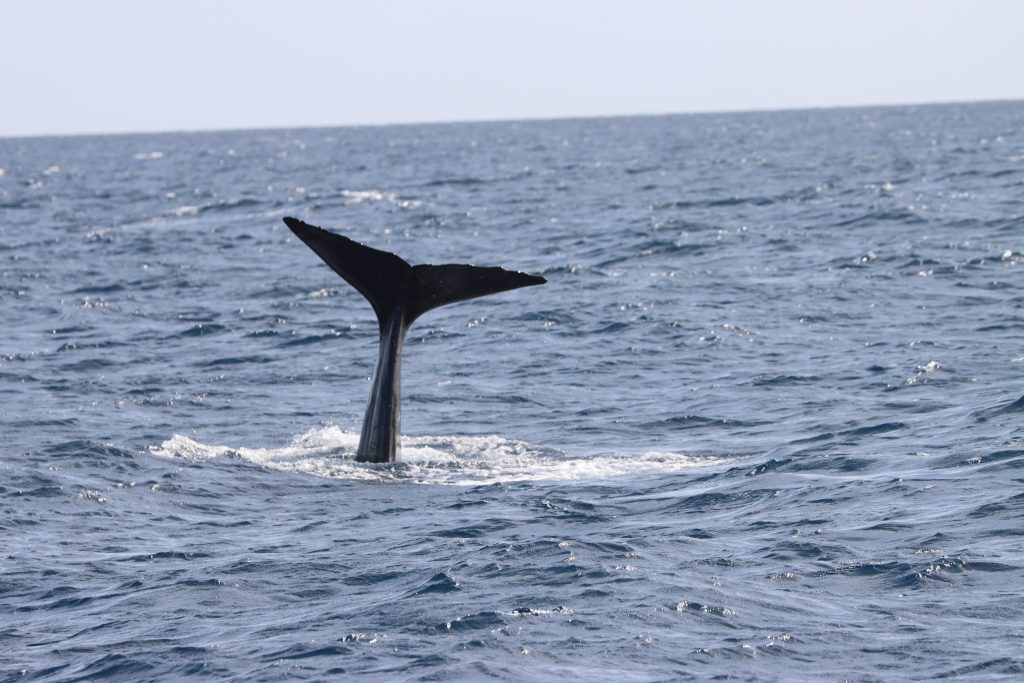 It also became very clear that cetaceans and all marine mammals actually do not care about regional boundaries. They migrate, hunt and rest all over the Caribbean and beyond. Protecting them around one island does not safeguard them from the threats they face elsewhere. Inspired and energized by this experience, my goal is to continue to collaborate and realize effective implementation of the Yarari Marine Mammal and Shark Sanctuary. This is a legally designated safe haven for all marine mammals and sharks. It is currently only established for the Caribbean Netherlands but will hopefully soon be connected to the entire Dutch Caribbean and beyond. The ocean, our Caribbean Sea, is the home of these marine animals. A home we share with them, and therefore we need to help take care of it while taking care of them.

Our Own Little Caribbean Cetaceans