The Largest Marine Mammals are Under Threat

In the past, whales and dolphins have suffered greatly from hunting. This is now more under control with new regulations, but cetaceans still face other threats. Due to climate change, the temperature of the seas has already risen by 0.7°C. This causes the habitats of cetaceans to change, which can mean that the animals must move to other areas. They are specifically adapted to certain living conditions and any temperature difference can already have a lot of influence.

Whales and dolphins also suffer a lot from the pollution of the ocean. They get entangled in floating nets, the ghost gear. Plastic waste floating in the sea is eaten by the animals, and together with other toxic substances, can cause illness or death. Overpopulation of boats on the water cause habitat disturbance. There are regular collisions between ships and slow-swimming cetaceans. The noise caused by shipping, oil drilling, and construction disrupts whale and dolphin communication. Loud man-made sounds such as drilling and explosions can even cause them to become deaf, stranded, or die.

Why is it important to protect the whale?

Whales play a special role in our fight against climate change. They store large amounts of CO2 in the body during their lifetime. When they die, they take it to the bottom of the ocean, where it remains buried. Whale droppings also have an important influence on CO2 in the atmosphere. Their feces feeds phytoplankton, small animals that absorb the CO2 and convert it into oxygen.

Why is it important to protect the dolphin?

Dolphins are an important link in the marine ecosystem. Dolphins are at the top of the food chain and can tell us a lot about the health of the ocean and the number of fish. They eat many different types of fish and plankton, but they are also eaten by larger predators, such as large sharks. In this way, the underwater life remains in balance.

Because dolphins are important in the ecological balance of the underwater life, it is necessary that they are well protected. WWF protects the dolphin by reducing pollution in the sea, for example, by cleaning up plastic and tackling climate change. 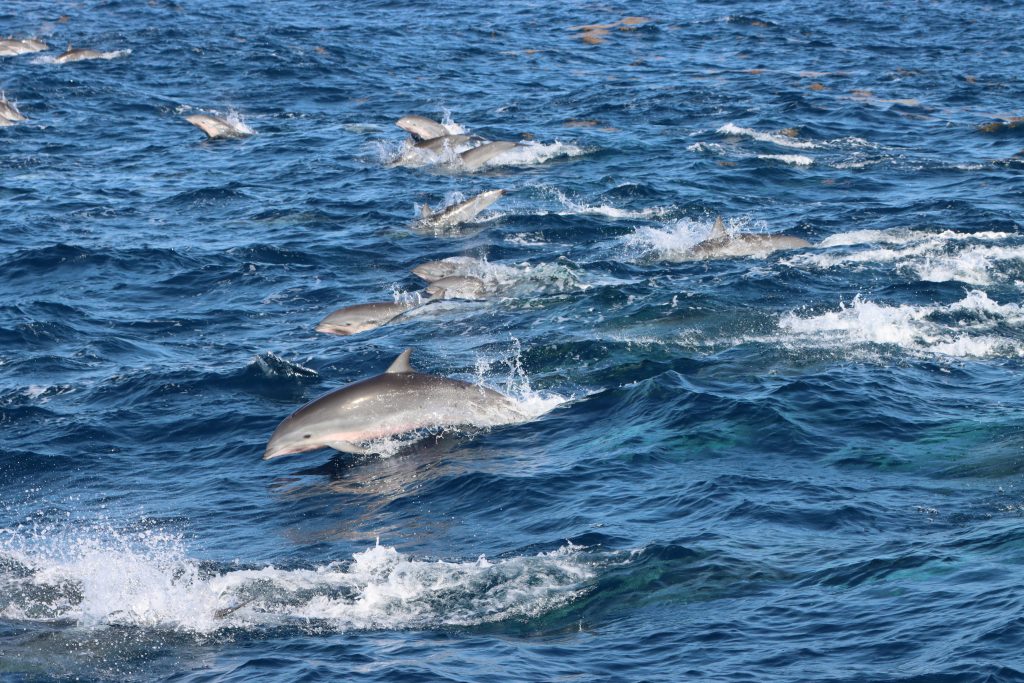 We are working hard to improve the situation of cetaceans. We work with countries and organizations on a local and international scale to push for the creation and enforcement of cetaceans conservation rules. For example, we want to slow down sailing in areas where whales and dolphins live to reduce collisions and to decrease shipping noise. We also conduct research on whales and dolphins together with scientists such as the research team of the Caribbean Cetacean Society in order to be able to protect them even better. Read more about other WWF projects to protect whales and dolphins: https://wwfwhales.org/

Whales are mammals that live in water. Like us, they need air to breathe and give birth to live young – unlike most fish, which filter oxygen from the water with their gills and lay eggs. You can recognize whales by the blowholes on their heads, with which they breathe.

There are many species of whales, such as the humpback and northern right whale. Cetaceans can be divided into two groups: baleen whales and toothed whales. Baleen whales feed on zooplankton, such as krill, and small fish, such as herring. With their baleens (a kind of long brushes in their mouths that work as a sieve) they filter the animals out of the water. Blue whales can eat up to 4 tons of krill a day. Most baleen whales are huge. For example, the humpback whale can grow up to 18 meters in length and the blue whale, the largest animal on Earth, can reach up to 30 meters. Toothed whales, such as dolphins and porpoises, use their teeth to eat fish, shellfish, or squid. Toothed whales are generally smaller than baleen whales, except for the sperm whale, which is the largest toothed whale and is on average 16 meters long. Dolphins are thus also cetaceans, but are categorized in a different “family”. 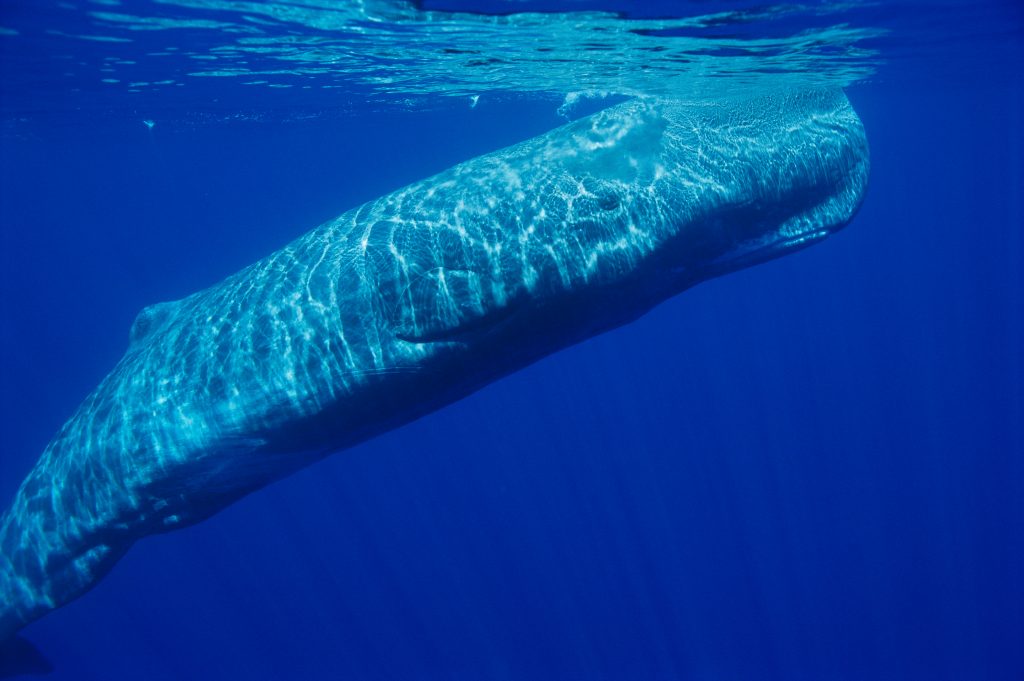 Some whales like to live alone: others prefer to live in groups or pods. Dolphins and sperm whale calves, stay with their mothers for a longer period of time than other cetaceans. Whales communicate with each other through sounds underwater. Baleen whales make long “songs” of different tones and sounds that can sometimes be heard for miles. Dolphins and sperm whales catch their food by clicking sounds (this is called echolocation). Human noise at sea (ship’s engines, oil drilling, piling for windmills, etc.) can damage or disrupt whales’ hearing, making it more difficult for the animals to eat and to find and communicate with each other to reproduce.

Dolphins are small cetaceans. There are about 35 species of dolphins, which can be found in oceans and major rivers around the world. Dolphins look like fish at first glance. However, they are mammals that are highly adapted to aquatic life. They have a streamlined body and fins that allow them to swim quickly and agilely.

Like all mammals, they breathe oxygen with their lungs and they regularly surface for this. This makes them popular with tourists: when they come to take a breath, they are often easy to see and sometimes they make big jumps. Because they breathe above water, dolphins sleep by turning off only one half of their brains at a time. 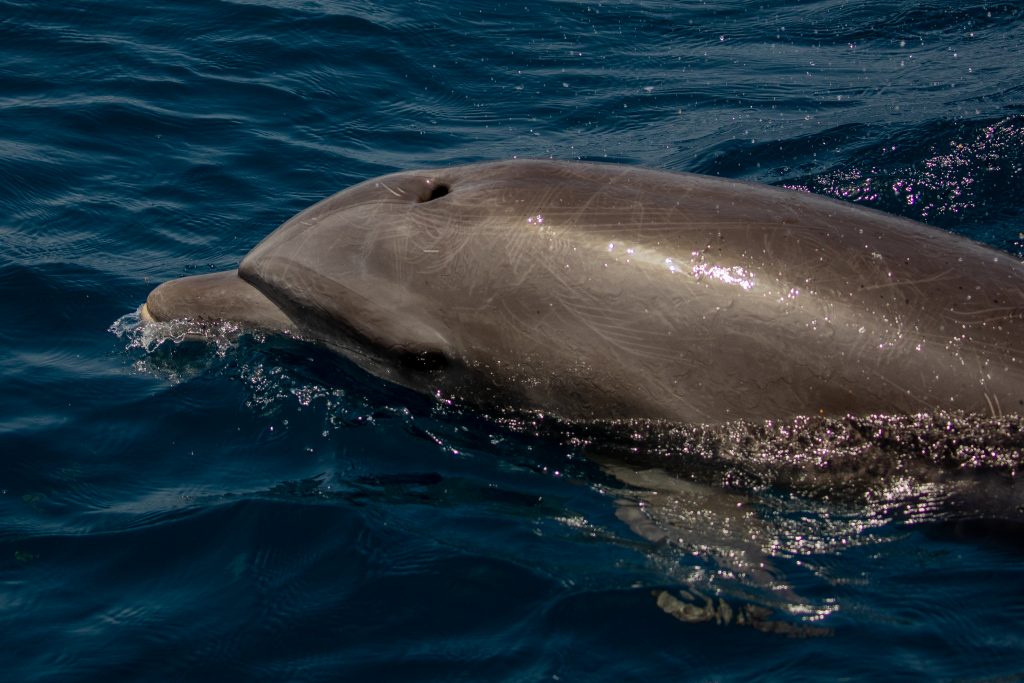 Dolphins are warm-blooded and nurse their calves. A baby dolphin stays with its mother for about six years. Dolphins are social and highly intelligent animals and like to live in groups, sometimes with more than 100 others. Sometimes they can also be found among other species, swimming for long stretches with whales. Dolphins communicate with each other through clicks and whistles.

By making clicking sounds and picking up the echoes of bouncing sounds, dolphins can learn the size, shape, distance, speed, and direction of objects. They use echolocation to find fish, squid, or other prey. A bottlenose dolphin can make up to a thousand clicking sounds per second.